In 1384 on October 20th Lady Katharine Berkeley, the second wife of Thomas III the Eighth Lord of Berkeley formally endowed the school and chantry at Wotton-under-Edge. She died in 1385, outliving her husband by twenty-four years, her body was laid to rest alongside his under the altar tomb in Berkeley Church. 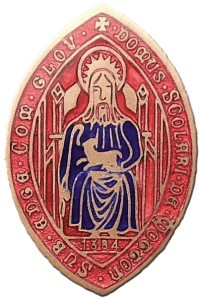 We the said Kitherina (Katherine), attentively considering that the purposes of man desiring to be informed in grammar which is the foundation of all liberal arts, is daily defeated and frustrated by poverty and want of means; therefore for the maintenance and exaltation of Holy Mother Church, and the increase of divine worship, and other liberal arts and sciences, out of the goods bestowed on us by God have procured the said Walter and Williams to acquire certain lands and tenements in fee, that they may build (re-build?) a school-house in Wotton for the habitation and likewise dispose of them for the maintenance of a master and 2 poor scholars of the art of grammar; which master and his successors shall govern and inform all scholars coming to the same house or school coming for instruction in this art without taking anything for his trouble from them or any of them.

The Foundation Deed of Wotton-under-Edge Free Grammar School was sealed with Katharine’s personal seal which showed St John holding a lamb and has the Latin inscription ‘Sigilla domus scolarii de Woton sub egge’. (The seal of the School House of Wotton-under-Edge). This seal is stamped on our prizes and also in special badges which are worn by some members of the School. The crest on the blazers is the Berkeley coat-of-arms. There is a number of different historical spellings of Katharine (including Kitherina and Katheryn) and it is not known when the spelling of the school name formally became Katharine.

The old school buildings in School Lane, Wotton-under-Edge, were erected in 1726 to which there were various additions later. Shortly after the School had become co-educational, Church Mill was bought in 1908. After the World War of 1939-1945, Carlton House was rented from the Post Office.

In 1961, the erection of a new building for 350 pupils on the present site at Kingswood Road, was started, and in January 1963 the School vacated the premises in Wotton and moved into it.

The erection of the first phase of extensions to the Kingswood Road buildings began in March 1972, and the extensions were completed for the start of the Autumn Term 1973, when Katharine Lady Berkeley’s re-opened as a comprehensive school for 830 pupils, marking the end of selection of boys and girls at the age of 11+ for the two separate secondary schools in Wotton. Wotton Secondary School formally closed at the end of August 1973.

In August 2011 the school was granted Academy status and is therefore an independent state school directly funded by the Department for Education. Katharine Lady Berkeley’s School has operated continuously since its foundation in 1384.

A list of the Headteachers over the last 635 years: